The new Parish of Our Lady Star of the Sea covers the locality of Backworth, Monkseaton and Whitley Bay and came into existence on Gaudete Sunday, 2013. This marked the official approval given by the Bishop to the amalgamation of the three former parishes of Our Lady’s and St Edmund’s Backworth, Immaculate Heart of Mary West Monkseaton, and St Edward’s Whitley Bay, and was the result of several years of closer pastoral and administrative cooperation between the parishes. This had encouraged increased lay participation, especially faced with the reduction of priests. Since then, the development of the pastoral and administrative life of the new parish has continued to serve its members and the wider community in the area.

The name of the new parish was chosen by parishioners and exemplifies the devotion shown to Mary the Mother of God in the Catholic tradition and in the history and identity of each former parish. It is also culturally significant that St Mary’s Island and Lighthouse on the coast at Whitley Bay stands as an abiding sign of light and hope now held in the name of the new parish. The sacramental, pastoral and social life of the parish is sustained by its three churches and the history and character of each continues to shape the nature and purpose of its mission. A parish council and three separate church councils oversee the life of the parish under the supervision of the parish priest.

Our Lady’s and St. Edmund’s Backworth

dy’s and St. Edmund’s Church traces its history back to the nineteenth century. Its school opened in 1903 and was well used by the local mining community. The church and presbytery were built in 1954, and the 60th anniversary of the opening of the church was marked by Bishop Seamus Cunningham celebrating a Mass of Thanksgiving with parishioners and invited clergy in December 2014. This brought together parishioners from the new Parish of Our Lady Star of the Sea. The school continued until 1981, when it was closed due to a reducing school roll. For a number of years after its closure, the school was used as a community library and a privately managed and funded community learning resource centre. The closure of the school meant that Sunday Mass numbers dropped to around 65. This also coincided with the closure of local coal mines, which led to significant demographic and sociological changes in the area.

Backworth and the surrounding district including Shiremoor was, until recently, in the 15% most deprived areas of the country. When the parish lost its resident priest in the 1980’s, the presbytery was leased to the local authority as a residential home for the rehabilitation of vulnerable young adults. The parish then became part of a cluster of local parishes, and Mass attendance rose to around 120 and was aided by the a local large new housing development.

Sunday Mass is the main weekly activity at the church, with a range of church ministries and groups responsible for liturgy and music, a successful and fast growing Sunday Children’s Liturgy of the Word, care of the sick and housebound, and Catholic devotions including Stations of the Cross, the Chaplet of Divine Mercy and May Devotions. There is also a monthly coffee morning following Sunday Mass. Fundraising is also a strength of the church community, supporting disabled children in Kenya and the International Refugee Trust in Uganda and Sudan which is supported by the sale of homemade jam and a raffle. The wider Churches Together “Walking With” project or asylum seekers is also well supported by Our Lady’s and St. Edmund’s. 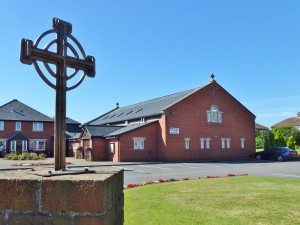 The new parish at West Monkseaton came into existence in the December of 1960, and before a pre-fabricated church building was erected, parishioners celebrated Mass in various places including the local cinema and the upstairs room of the Hunting Lodge Pub. The local branch of the Sea Cadets in Monkseaton was used until the church was completed for the sum of £8,500.

The tabernacle was provided by the Sisters of Mary Medical Missioners in South Shields when their convent closed on their return to the United Sates of America. The building was used for the next 30 years before a more permanent church was built. During this time, the parish flourished both spiritually and socially, with a wide range of parish groups. The local Star of the Sea Primary School was also built during this time, and two local Catholic secondary schools amalgamated to create St Thomas More High School -now St Thomas More Academy.

It was agreed that the new building should be dual-purpose, allowing for the celebration of Mass, the Sacraments and the prayer-life of the parish, as well as being used as a parish and local community centre. The costs of the new building were met through the sale of half the original land on which the former church had stood. Parishioners past and present and local community groups have derived comfort and enjoyment from the use of the dual-purpose building. It is hoped that with God’s blessing, all parishioners will continue to benefit from Immaculate Heart of Mary in West Monkseaton.

The following document gives an explanation of the wood carvings at Immaculate Heart of Mary. 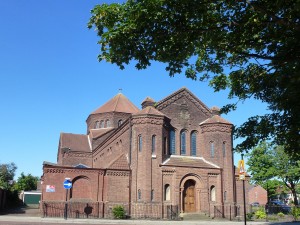